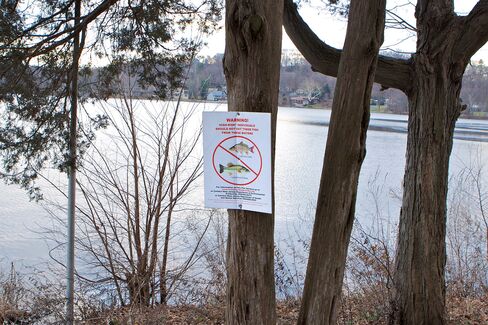 A 2012 warning not to eat fish from this lake in Pompton Lakes, N.J., site of a DuPont plant. Photographer: Bill Wolfe

When DuPont announced plans to spin off its major chemical operations in October 2013, it said the move would create a cash-generating dynamo with the leading market share in most of its businesses. The spinoff would let DuPont focus on higher-value products such as solar-panel materials and genetically modified crop seeds, as well as alternatives to fossil fuels.

The new company, Chemours, created on July 1, inherited 37 active plants globally that produce materials such as titanium dioxide, a pigment that adds opaqueness to paints, and fluorochemicals such as Teflon nonstick coatings. DuPont investors have been given one Chemours share for every five DuPont shares they own. Chemours will owe DuPont a $4 billion dividend for share buybacks, too. Chemours shares, which have been trading since June 19, have fallen 21 percent.

Chemours is also on the hook for something uglier: potential liabilities at 171 sites in the U.S., not all of which have been identified. These may include as many as 25 active U.S. factories. Investors don’t know how much more will be required to respond to Environmental Protection Agency cleanup demands at those sites or whether additional personal-injury lawsuits will arise.

Cleanup of the 171 sites, DuPont says, will cost from $295 million to $945 million. “In general, the experience is cleanups cost more than anyone ever thinks,” says Ronald Gilson, a professor of law and business at Stanford and Columbia law schools. One site alone, in Pompton Lakes, N.J., where for 97 years DuPont made explosives that polluted the soil with mercury and lead, could cost $116 million, Chemours says. (The EPA is still investigating the property around the inactive plant.)

Environmental costs for a site in Parkersburg, W.Va., that produced perfluorooctanoic acid (PFOA) used in Teflon could reach $1 billion, according to Keep Your Promises DuPont, an activist group in the mid-Ohio Valley. The chemical, which DuPont phased out in 2013, has been linked to cancer. In trials beginning later this year, Chemours faces 3,500 personal-injury and 32 wrongful death claims involving Parkersburg. Chemours estimates the cost to remove PFOA pollution at its sites will be $14 million. It is also required to fund up to $235 million for medical monitoring in the Parkersburg community and pay whatever liabilities come from the personal-injury suits.

Chemours executives and shareholders are betting the new company will be profitable enough to pay for the environmental liabilities, says Edward Adams, a professor of finance and law at the University of Minnesota and a DuPont shareholder. Chemours products accounted for 19 percent of DuPont’s sales last year. The company, however, has inherited 62 percent of DuPont’s environmental liabilities.

DuPont isn’t the first corporation to try to transfer liabilities through a spinoff. Isolating liabilities is “not an insubstantial reason for doing spinoffs,” says law professor Gilson. Companies want to isolate uncertainties, he says.

In 2009 the EPA and the Department of Justice sued Anadarko over the environmental obligations of Tronox, a chemical maker spun off by Kerr-McGee in 2005. (Anadarko bought Kerr-McGee after the spinoff.) Tronox made most of its income from titanium dioxide. It filed for bankruptcy and in the trial was found liable for cleanup costs at 2,800 sites. The EPA demanded $25 billion to clean up the sites and eventually settled for $5.15 billion from Kerr-McGee and Anadarko. Amer Tiwana, a credit analyst at CRT Capital, says Chemours bears some similarities to Tronox. “With four times leverage on the business, they certainly seem to be loading up Chemours with debt,” he says.

Credit ratings company Moody’s said in an April 27 report that Chemours has a “high financial leverage” compared to its peers, with a debt-to-earnings ratio of 4.7. Moody’s analyst Joseph Princiotta also cited, “significant near-term litigation risk” from two trials over PFOA scheduled to begin this fall and four in 2016. DuPont may not be able to untangle itself from Chemours’s liabilities, if the new company can’t pay them. “The parent is not going to be able to strip itself of liability. There is no way a court can allow that,” says Adams.

“We’re a very well-capitalized company,” says Mark Vergano, Chemours’s chief executive officer. “We have the leading position in the marketplace and the lowest-cost position. I feel confident in our ability to compete well.” DuPont and Chemours “are committed to continuing to fulfill all of their environmental and legal obligations,” says DuPont spokesman Dan Turner.

The market for titanium dioxide may improve before Chemours faces any big payouts for environmental cleanup. Titanium dioxide prices are at a three-year low because of oversupply, with dim prospects for an imminent recovery. Declining demand probably won’t change soon, according to CRT’s Tiwana.

Sales of the pigment could recover, says Jim Sheehan, a SunTrust Robinson Humphreys analyst. Chemours’s business lines, he says, are “the real dirty part of DuPont” and “just happens to be where a lot of the liabilities are.”

The bottom line: DuPont could be on the hook if Chemours can’t pay for environmental cleanup and personal-injury lawsuits.