The chemical was leaked from DuPont’s plant in West Virginia into the Ohio River, which is used for drinking water and allegedly resulted in one man developing testicular cancer, Mody said.

The jury awarded the man $5.1 million in damages, which Chemours agreed to cover, DuPont was found responsible for negligence, Mody said.

Seperately, TheStreet Ratings Team has DuPont at a “buy” with a ratings score of B+. The company’s strengths can be seen in multiple areas, such as its increase in net income, largely solid financial position with reasonable debt levels by most measures, good cash flow from operations, solid stock price performance and growth in earnings per share. TheStreet Ratings team feel its strengths outweigh the fact that the company has had somewhat disappointing return on equity.

TheStreet Ratings objectively rated this stock according to its “risk-adjusted” total return prospect over a 12-month investment horizon. Not based on the news in any given day, the rating may differ from Jim Cramer’s view or that of this articles’s author.

You can view the full analysis from the report here: DD 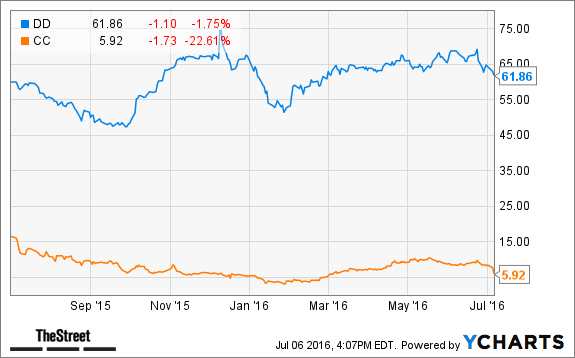