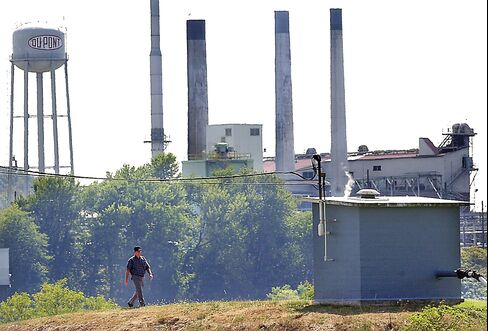 DuPont Co.’s plan to spin off its Teflon unit is spurring concern on the West Virginia-Ohio border that the new company won’t cover medical payments for residents sickened by a chemical long-used at the production plant.

In 2004, as a result of a class action filed three years earlier, DuPont agreed to pay $235 million to monitor residents’ health around Parkersburg, West Virginia, where the plant is located. The new company, though, will start life heavily in debt because of a promised $4 billion dividend it owes DuPont after the spinoff, set for July 1.

Now a group called Keep Your Promises DuPont is demanding DuPont explain how the new company, Chemours Co., will fund its commitment to the community’s health. The faceoff is part of a 14-year debate over pollution from the plant that’s been the catalyst for 3,500 personal injury lawsuits and 32 wrongful death claims, according to an April 21 regulatory filing.

Chemours is “thinly funded,” and if it starts losing personal injury cases, its obligations could be “enormous,” said Paul Brooks, a Parkersburg physician and a member of the Keep Your Promises advisory group. The group is taking its case to Wilmington, Delaware, DuPont’s hometown, ahead of the company’s annual shareholders meeting next week.

Harold Bock traveled from Parkersburg to say that the company had “poisoned” his water at a rally Thursday.

“My community deserves better than to be treated like a waste dump,” Bock, 69, said at the event in Rodney Square, across the street from DuPont headquarters. “We’re not leaving until we get some answers.”

The community group expressed its concerns in an open letter to DuPont Chief Executive Officer Ellen Kullman. The letter asked Kullman to say how much Chemours will pay to make sure “our communities will be made whole after the spinoff.”

DuPont is spinning off Chemours, which makes fluoropolymers such as Teflon, refrigerants and titanium-dioxide pigment used in paint, to focus on faster-growing businesses with steadier earnings.

DuPont and Chemours are “committed to fulfilling” any environmental or legal obligations for the plant, according to an e-mailed statement from the chemical maker.

In its April 21 filing, Chemours said that while it can’t estimate its potential liability for injury and death suits linked to the plant, it “does not currently believe that the ultimate disposition of these matters would have a material adverse effect on Chemours combined results of operations, financial position or liquidity.”

The squabble over the plant’s health effects began in August 2001 with accusations in a class-action suit in West Virginia state court that residents living near the Washington Works facility had suffered, or may suffer, deleterious health effects from exposure to a chemical known as PFOA that had entered the community’s drinking water.

Under the settlement covering 80,000 people, DuPont agreed to pay for health monitoring, including visits to doctors to check for early signs of disease. It also said that people who get sick may file personal injury claims against the company. Chemours, through DuPont, has put $1 million in escrow to fund the program.

Area residents say that may not be enough.

“DuPont is obligated not only monetarily but morally to take care of these people,” Joe Kiger, a Parkersburg resident, said in an interview. He, like the physician Brooks, expressed concern Chemours may be overwhelmed by its medical obligations and seek bankruptcy protection to escape them.

Six Diseases
The research, involving about 70,000 people, linked the chemical to six diseases, including testicular cancer, kidney cancer and thyroid disease, according to a regulatory filing. In 2013, a year after the report was completed, DuPont reported it had stopped making and using PFOA.

Chemours will be facing heavy debt once the spinoff is completed. It has borrowed about $4 billion as it prepares to pay the similar-size dividend, giving it a pro-forma debt-to-Ebitda ratio of 4.5, according to an April 30 research note from Richard Bourke, a Bloomberg Intelligence analyst.

For similar companies, the median ratio of debt compared to earnings before interest, taxes, depreciation and amortization is 3.1.

Trian Fund Management, the activist investor trying to win four DuPont board seats at the annual investor meeting on Wednesday, said DuPont is loading too much debt onto Chemours.