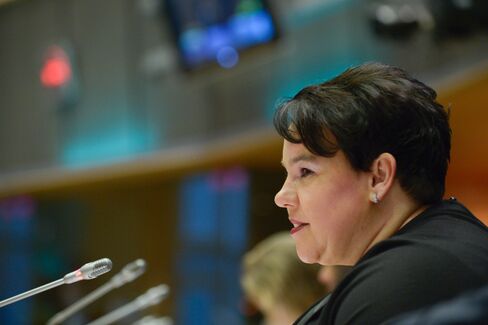 Hundreds of residents in the Dutch city of Dordrecht have signaled an interest in getting their blood tested for a chemical used at a former DuPont Co. factory, harking back to a similar survey in the U.S. a decade ago that established a probable link to cancer.

Tests were also ordered by Deputy Environment Minister Sharon Dijksma as part of a deepening inquiry in the Netherlands into whether past use of the Teflon ingredient called C-8, or PFOA, at the Dordrecht plant is linked to health problems.

A first for DuPont in Europe, they come just as a 15-year-old legal battle alleging the company knowingly polluted U.S. drinking water is going to trial in an Ohio court, and U.S. regulators say they are about to announce new guidelines for acceptable levels of the chemical in drinking water. The widening issues come despite its phase-out by 2015.

As Dordrecht residents and the Dutch government await answers about exposure in the Netherlands, they are looking to the U.S., where a study of 70,000 residents near a plant in Parkersburg, West Virginia, established probable links between the chemical and six diseases. Dupont and the current owner of both plants, Chemours Co., say they haven’t violated the law. DuPont is fighting the U.S. lawsuits and has said it has acted appropriately in its use and study.

“I have lived in the shadow of DuPont for more than 50 years,” Anton van Rees, a 55-year old municipal councilor, said in an interview Tuesday at a hotel in Dordrecht, where he attended a meeting on C-8 organized by the Dutch National Institute for Public Health and the Environment and regional authorities. “I have been ill myself. Unconsciously you’re making the connection and you worry.”

Situated about 20 kilometers (12 miles) from Rotterdam in one of the oldest cities in the Netherlands, the factory in Dordrecht is now owned by Chemours, a company spun offlast year from DuPont that agreed to take on liability for the plant, as well as the one in Parkersburg and sites in Japan and China, where it has joint ventures. C-8, once used to make non-stick Teflon frying pan coatings, firefighting foams, and rain gear, was phased out by most global makers by the end of last year. Other similar chemicals are now used to produce slippery, nonstick or waterproof surfaces.

A report published last month by the Dutch health institute, a unit of the ministry, concluded that people living in the vicinity of the Teflon plant may have had levels of C-8 in their blood until 2002 that were higher than their recommended chronic exposure limit. It said they were exposed to lower concentrations than people near the Parkersburg site.

DuPont began reducing C-8 use around the turn of the century and stopped using it in 2012, Joke Herremans of the institute said at the meeting on Tuesday. The blood level estimates were based on models of C-8 in air and drinking water between 1970 to 2012. Preliminary findings don’t indicate increased risks for cancer among the population of Dordrecht and two nearby towns, the report said.

In response to queries about the Dutch report and planned further inquiry, Chemours spokeswoman Janet Smith said the plant never exceeded permitted emissions for C-8. The government has only recently estimated C-8 blood levels based on models of emissions from more than a decade ago.

“It’s not like there was a limit in place and we exceeded it,” Smith said.

The links between C-8 and health risks were well documented in the U.S. study that relied on blood tests on 70,000 people. Funded by DuPont, it was part of a unique settlement that Stanford University law professor Robert Rabin said could help plaintiffs and regulators make a case in the Netherlands or elsewhere.

After 80,000 people near the Parkersburg plant sought to sue DuPont, the company agreed in 2004 to help form a science panel to study their claims. Under the settlement, it also agreed it wouldn’t contest the findings. After seven years of studying close to 70,000 exposed people, the panel found a probable link between C-8 and six diseases, including kidney cancer, testicular cancer and ulcerative colitis.

In the U.S., Chemours is facing widening legal and regulatory issues over the chemical. Sued in 2001 by residents around the Parkersburg plant, DuPont is now in the middle of a series of trials which consolidate 3,500 lawsuits. A jury found the first plaintiff should get $1.6 million, and DuPont is appealing. The second case settled, and more trials are scheduled for the coming year. Recent developments in the case have been considered by Moody’s Corp. as “credit negative” for Chemours.

The U.S. Environmental Protection Agency is expected to issue guidelines in the coming months for concentrations of the chemical in drinking water. In the U.S. trials, DuPont has said that while government agencies set limits for the amount of some chemicals in the water, C-8 isn’t regulated as such. The Netherlands also plans to set a limit as well as test local drinking water and waterways.

In response to those allegations, DuPont spokesman Dan Turner said DuPont is committed to fulfilling any legal or environmental obligations it has regarding PFOA.

“DuPont has always acted responsibly and appropriately based on the health and environmental information available,” Turner said. The company “has always made the health of our employees and the communities in which we operate a priority.”

As many as 400 people living around the Dordrecht factory have signaled they want to have their blood tested for C-8, according to Van Rees, who keeps track through messages he gets via e-mail and social media platforms.

The Dutch health institute will choose which residents to test for its expanded study, which Deputy Minister Dijksma has said could take as long as two years. The agency has set an exposure limit for C-8 in blood of 89 nanograms per milliliter, lower than the 142 nanograms per milliliter limit used by the EPA in the U.S., it said in a separate letter discussing the report.